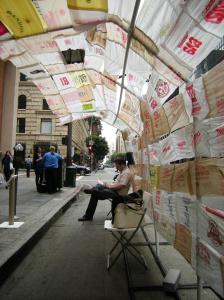 The pop-up urbanism trend that started with parklets in San Francisco is spreading across the country. These temporary parks in place of parking spots have shown up in Oakland, Portland, Los Angeles, Chicago, Dallas, and even smaller cities like Asheville, NC. The concept has spread beyond temporary park space and is now testing retail concepts in gentrifying areas.

The idea for parklets emerged in 2005 from PARK(ing) Day in San Francisco, an annual event that will happen on Sept. 21 this year, when residents reclaimed a parking space for the day by setting up chairs, tables and plants to create a temporary park. Last year, PARK (ing) Day occurred in 162 cities and 35 countries. The true “parklet” movement was kicked off in March 2010 when San Francisco approved the building of a parklet in front of Café Mojo on Divisadero Street. Another parklet milestone is the Powell Street Promenade, the largest parklet in San Francisco that was installed in 2011. This area provides a space to eat, talk and relax, providing people a reprieve from the bustle of the corridor, which is one of the busiest in the nation and frequented by more than 100,000 people on an average weekend. 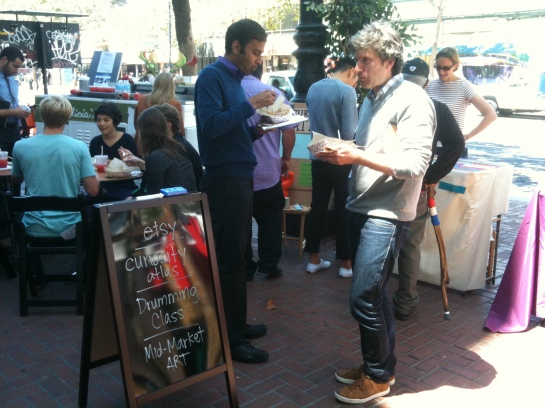 Lunchtime at the SqFt urban pop-up on August 1.

Earlier this month, I dropped by one of San Francisco’s latest urban intervention “SqFt”. Spanning several blocks between 5th and 7th on Market Street, the organizers programmed activities throughout the day that gave retail renters in the area a chance to try something new and it gave virtual companies the opportunity to interact with customers in person. The day began with coffee for bike commuters, a yummy tamale vendor provide fuel for drumming lessons, etsy artist sales and yoga lessons.

With a surge of interest in urbanism across the country, communities are rethinking public space. The advantage of pop-ups is that they offer fast and inexpensive tools for making a big impact. Designers and planners are heavily involved in the big and long term moves of a city and each project becomes the latest calling card for the firms involved. These mini moves are also opportunities to distinguish a firm’s design, creativity and philosophies. The phenomenon of pop-up urbanism, also known as tactical urbanism, has not only gained popularity, but has created a way to test new concepts before embarking on substantial political and financial commitments with the intention of improving the quality of human life in sustainable way.

What started as parklets has evolved to temporary storefronts like [storefront] Olson Kundig’s experimental work place for the firm’s community collaborations in Seattle and David Baker’s San Francisco StoreFrontLab, a year-long exploration of storefronts as places of community, creativity and local industry. [storefront] has performed as a record store, a mushroom farm, Hardware [store] and is currently an exhibition focused on the individuals working in the Puget Sound region to eradicate poverty and homelessness, Skid Road. 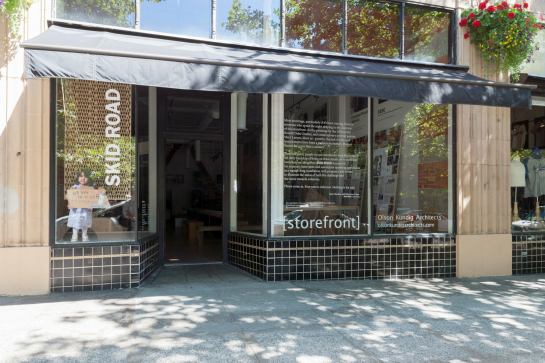 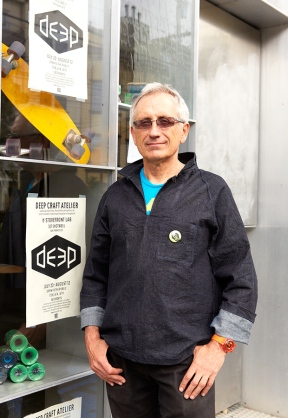 The upcoming pop-up at StoreFrontLab is the Post-Car Travel Agency, which opens on Aug. 17 for a week of talks, one-on-one travel services and discussions on living car-free. Before that, it was a craft shop selling artisan goods such as skateboards, clothing and sandcastle molds. 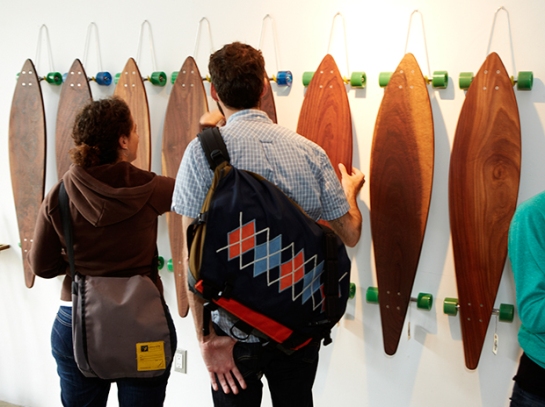 Tactical urbanism seems to be the current motif in the architecture world. The theme of this year’s U.S. Pavilion at the 13th International Venice Architecture Biennale is Spontaneous Interventions: design actions for the common good. The biennale will focus on compelling and actionable strategies, ranging from urban farms to guerilla bike lanes, temporary architecture to poster campaigns, urban navigation apps to crowdsourced city planning.

Conger Moss Guillard’s (CMG) Parkmobiles, which are robust, movable containers with lush gardens that fit in a street parking space, was accepted into this year’s prestigious Venice Biennale. While everyone is embracing the gush of interest in pop-up urbanism, there are some concerns. How can tactical urbanism work in architecture and the formal planning process? Mike Lydon, principal at Brooklyn’s Street Plans Collaborative and author of Tactical Urbanism, Volume 2, is among the tactical urbanists contributing to the Venice Biennale. He says that the planning process won’t be replaced by pop-up-urbanism.

“Following up on comprehensive planning efforts, the neighborhood-wide or city-wide planning process can use tactical urbanism to take some of the most popular ideas and really do things quickly rather than have them wait on the shelf for the million-dollar funding stream. Tactical urbanism is a tool for the more formal planning process,” Lydon said in an interview with the Architect’s Newspaper.

What do you think is next in the pop-up evolution?